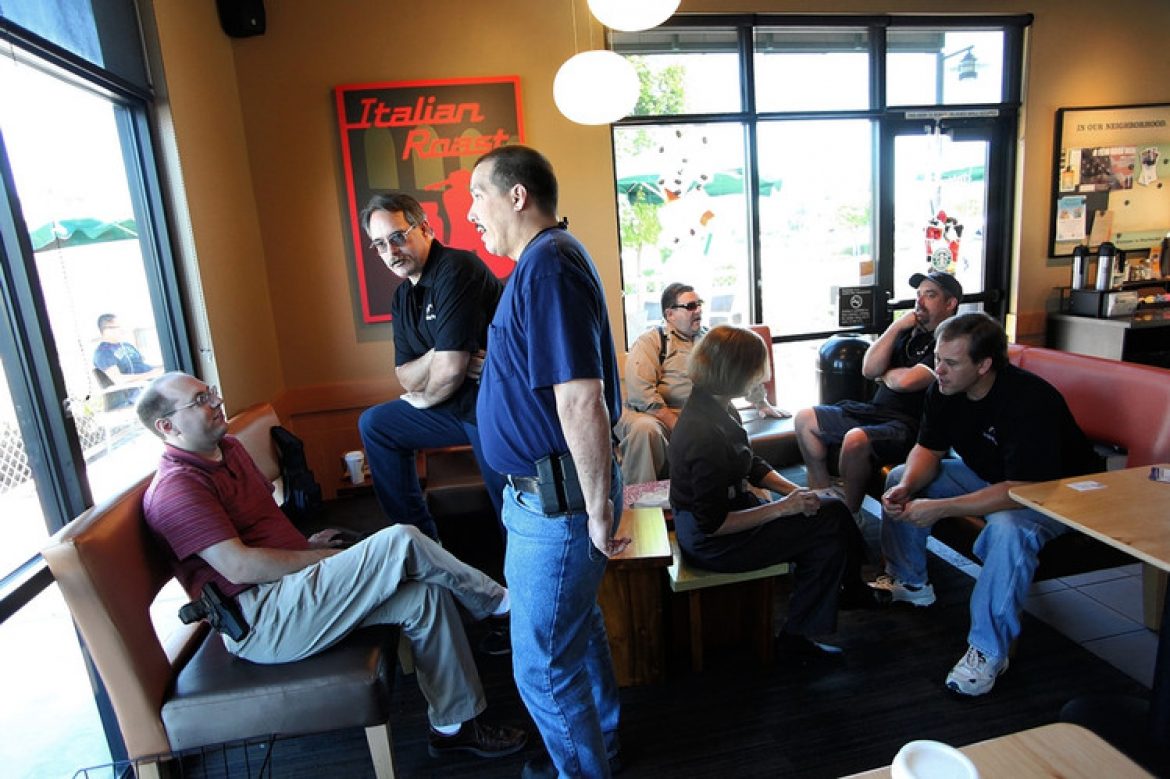 Customers Asked To Not Bring Firearms

In an open letter published on Starbucks’ website and in newspaper ads, the coffee chain’s CEO, Howard Schultz, “respectful(ly) requests that customers no longer bring firearms into our stores or outdoor seating areas.” It’s a “request” because “a ban would potentially require our partners to confront armed customers, and that is not a role I am comfortable asking Starbucks partners to take on.”

Yet in a sense, that’s what his “partners” are doing right now. The gun-wielding folks his employees have to confront aren’t “customers”; they’re armed robbers.

Last month, a man walked into a Miami Starbucks wearing a ski mask. He pointed a gun at two employees and escaped with more than $700 in cash. As you might expect from a company with 11,000 stores in the USA, many in urban areas, this was hardly the first time Starbucks employees have “confronted” armed robbers.

It’s not just a matter of money lost or people terrorized. In 1997, a robber named Carl Cooper executed three Starbucks employees at a store in Washington, D.C. Could a legal gun owner have stopped Cooper’s rampage? We’ll never know.

Nor will we know whether one of the victims could have saved all their lives with a defensive firearm. Starbucks, like most other major companies, does not allow its employees to exercise their gun rights while on the job. It doesn’t trust them.

With this non-ban gun ban, Starbucks is signaling that the company doesn’t trust its legally armed customers, either.

But one thing we do know is that, 11 months ago, an armed off-duty policy officer thwarted the armed robbery of a store in Hernderson, N.V. An armed customer might have been handy when a a Starbucks in Orange County, Calif., was robbed a couple months later.

Guns save lives. Americans are, at a minimum, responsible for tens of thousands of defensive gun uses per year. Whether sipping a latte in Starbucks or just walking down the street, armed Americans both deter and counter robbery, rape and murder. Why would Starbucks turn its back to that?

Schultz’s decision seems to be based on other factors. “Starbucks stores are places where everyone should feel relaxed and comfortable. The presence of a weapon in our stores is unsettling and upsetting for many of our customers.” In other words, the CEO believes that guns are bad for business.

But gun bans are good for gun control advocates. They’ve welcomed Starbucks’ anti-gun open letter. And why not? The prohibition gives them a PR win, if not an actual restriction on guns. Demonizing and disarming Americans trying to protect themselves and loved ones is a first step toward greater restrictions.

Schultz’s decision to disarm Starbucks’ customers, whether by request or eventual edict, ultimately won’t satisfy gun control activists, either. Schultz’s attempt to split the baby — by “requesting” a gun-free zone instead of creating one — simply keeps the debate over Starbucks alive.

It will flare again when the next time someone dies in one of his stores. Then there won’t be an easy public relations move. There will be a debate about life and death, and Starbucks will have to choose one side or the other.

Robert Farago is publisher of The Truth about Guns.