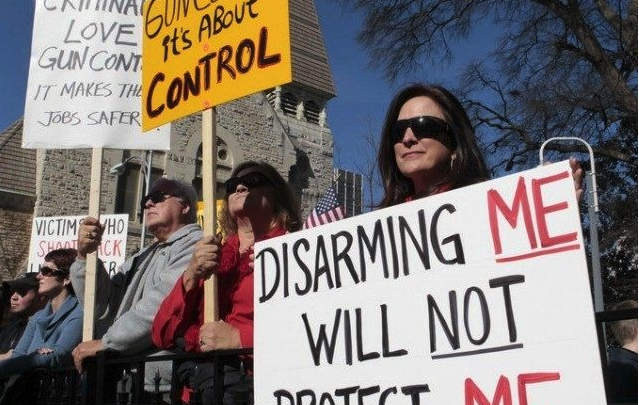 The group who came short on ballot propositions to repeal seven pending anti-gun laws is now switching gears to put the right to keep and bear arms in the California constitution.

Banking on the help of the state’s estimated 13 million gun owners, San Diego businessman Barry Bahrami in July launched an effort by filing paperwork with the California Secretary of State’s office to put six referendums on the ballot in November to repeal a legislative package of gun control measures signed by Gov. Jerry Brown weeks prior. Greenlighted to circulate petitions and with a seventh referendum added, the group set out to gather 450,000 signatures of registered voters on each to satisfy the 365,000 required by law before Sept. 29 to make the ballot.

Despite brisk effort and some 700 polling locations, the petition drive ran out of time after collecting just over half the number of signatures needed.

Now the group is retooling for a new fight, launched Tuesday, to add a proposed amendment to the California Constitution to enshrine gun rights as a core part of state law with the theory that any proposed legislation not in line with the amendment would be illegal.

While Californians’ right to keep and bear arms, as in the rest of the country, is nominally covered under the Second Amendment of the U.S. Constitution, a “Yes” vote would in theory give state lawmakers a mandate to protect gun rights from future perceived encroachments. Such measures have proven popular in recent years in other states and most enshrine the right in some form — but not California.

The proposed amendment language is simple:

The right of the People to keep and bear arms, ammunition, and accessories typical to the normal function of such arms, in defense of his or her home, person, family, another human being, or when lawfully summoned in aid of the civil power, shall not be questioned. The rights guaranteed by this section shall be deemed fundamental. Nothing in this section shall be construed to prevent the Legislature from enacting general laws which limit the rights of convicted violent felons or those duly adjudged mentally infirm by a court of competent jurisdiction.

Instead of the six-week window the group had to raise 365,000 signatures on seven petitions, they will have six months to collect 585,000 on a single one to put the constitutional amendment on the next general election ballot. Further, they will have the benefit of petitions that can be printed at home and mailed in, similar to the successful drive to recall Gov. Grey Davis in 2002.

Bahrami told Guns.com that he and the volunteers learned from their short but intensive campaign and will be applying those lessons to the 2AforCA effort.

“The California Legislature did not play fair and as a result we did not get enough signatures in the short period of time we had with the Veto Gunmageddon referendum,” said Bahrami. “And so it is now time to put an end to their gun grab once and for all by way of an amendment to the California constitution.”

The group wants to slam dunk the petition process, which they will begin formally after November, by gathering a cool million signatures, or about one from every 13 gun owners in the state.

In the meantime, they are still trying to get the word out in opposition to Lt. Gov. Gavin Newsom’s ballot measure set which will be in front of voters in a few weeks.

“Right now, Prop 63 is the primary job,” Bahrami said. “It is very important that California voters reject this really horrible initiative ‘Safety for All (Criminals).’”